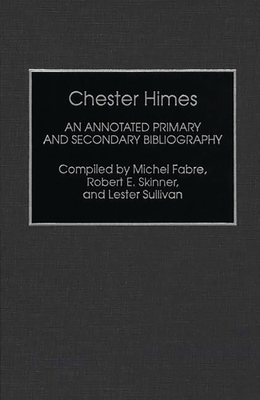 This is book number 30 in the Bibliographies and Indexes in Afro-American and African Stud series.

A contemporary of Richard Wright, James Baldwin, and Ralph Ellison, Chester Himes wrote with perhaps more angry fire than his celebrated colleagues about black protagonists doomed by white racisim and self-hate. Among his writings is a series of hard-boiled detective novels featuring black detectives and a host of Harlem hustlers. The acclaimed Harlem series and much of his later work were written in France where Himes lived as an American expatriate from 1953 until his death in 1984. Exhaustively researched and well constructed, this comprehensive bibliography clears up mysteries and dispels misconceptions about the extent of Himes's work and its critical reception.

The primary bibliography identifies all United States, French, and British first and second editions of Himes's novels, the first appearances in periodicals of his short stories, his collected fiction, and his magazine and book-length nonfiction pieces. It includes manuscript materials and a filmography of adaptations of his novels. The annotated secondary bibliography provides a key to the biographical and critical work produced about Himes in the United States, Britain, and France since the late 1940s. Chronologically organized, it is indexed by author and by titles of the relevant Himes's works. The volume's introduction outlines Himes's life and career, discusses gaps in his writing history, and attempts to provide a more realistic picture of his critical reception in the United States based on an analysis of the secondary bibliography rather than on previous views influenced by Himes's own negative perceptions. A chronology of Himes's career is also included, and the volume's preface explains the organization of the bibliography and how to use it. This work will be of special value to university libraries offering programs in popular culture, American literature, and African American studies as well as to individual scholars and researchers in these fields and scholars and collectors interested particularly in Himes and his works.

MICHEL FABRE is a full professor of the faculty of La Sorbonne Nuvelle, Paris, and is director of Le Centre d'Etudes Afro-Americaines. He has specialized in American and African-American literature for more than thirty years. Among his many publications are The Unfinished Quest of RIchard Wright (1973), The World of Richard Wright (1985), Richard Wright: Books and Writers (1990), and From Harlem to Paris: Black American Writers in France 1840-1980 (1991). He is currently at work on a biography of Chester Himes.ROBERT E. SKINNER, is University Librarian at Xavier University of Louisiana, in New Orleans and a frequent writer on the history and development of the American hard-boiled detective tale. His books include The Hard-Boiled Explicator: A Guide to the Study of Dashiell Hammett, Raymond Chandler, and ROse Macdonald (1985), Two Guns from Harlem: The Detective Fiction of Chester Himes (1989), and the forthcoming The New Hard-Boiled Dicks: Heroes for a New Urban Mythology. He is working with Michel FAbre on a critical edition of Chester Himes' last Harlem Domestic novel, Plan B.LESTER SULLIVAN is the University Archivist at Xavier University of Louisiana. He has written articles in Black Art, Black Music Research Journal, The International Review of Oral History, Louisiana's Black Heritage and Xavier Review. He is the author of the guide and the producer of the videotapes in ARC Light: A Series of Multi-Image Shows about Afro-Americans, Other Ethnic Groups, and Race Relations History (1983).