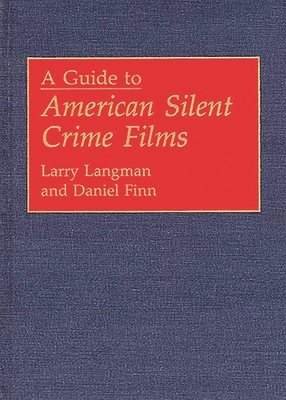 The immense popularity of movies has its roots in the silent films of the early 1900s, this being especially true of the crime genre. The authors of this Guide have compiled for the first time in one volume an entire history of the crime genre during the silent era, preserving the memories of these films for their own generation and introducing these works to a new generation thirsty for entertainment and knowledge. This Guide includes more than 2,000 film entries, complete with names of directors, screenwriters, and major players and offers a wealth of data supported by plot evaluations and occasional thematic commentaries. This is the only work that includes one- and two-reelers and serials along with full-length crime features.

Each entry covers title, date of release, distributor or studio, director, screenwriter, major cast members, plot description, and thematic commentary, reviving this almost forgotten genre for generations of students and movie fans both old and new. The Guide pays tribute to the glory of cinema pioneers as diverse as D. W. Griffith and Lon Chaney who have given the world a wide variety of stories and experiences both thought-provoking and startling. Although men tended to dominate the silent years in Hollywood, women managed to contribute dramatically. Among them were director Lois Weber and film personalities Mabel Normand, Pearl White, Mary Pickford, and Ruth Roland. These creative men and women and their often neglected works deserve a second look. The likes of Pacino, Eastwood, and Brando can look to the past where the ground for their work was carefully prepared in such earlier silent films as Griffith's The Musketeers of Pig Alley (1912) and von Sternberg's Underworld (1927).

LARRY LANGMAN, a free-lance writer, has taught the art and history of film for many years. He has written film articles for video magazines and has authored several books dealing with films and film history, including Writers on the American Screen (1986), An Encyclopedia of American Film Comedy (1987), and A Guide to Silent Westerns (Greenwood, 1992).DANIEL FINN has taught English in New York State for more then 25 years. He specialized in creative writing and article publishing and was an instructor of composition writing at Syracuse University. He has been working on an analysis of American short-story writers.