Resources for the Future: An International Annotated Bibliography (Bibliographies and Indexes in Economics and Economic History) (Hardcover) 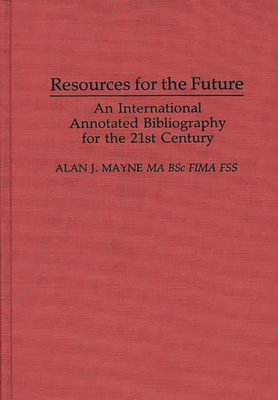 Resources for the Future: An International Annotated Bibliography (Bibliographies and Indexes in Economics and Economic History) (Hardcover)

Whatever profession one might be in today, the overriding priority is to anticipate future developments--political, economic, and social--in order to keep pace with this headlong, accelerating era. This book is designed with this priority explicitly in mind. It offers a one-stop source of extremely up-to-date information on books, journals, CD-ROMs, software, networks, organizations, foundations, and charities--indeed, on any activity which directly and predominantly is focussed on the improvement of global prospects for the next century. In the book section alone, over 1,200 books are described, with many extensive entries on books published within the past year. There are also extensive entries for earlier key books, together with occasional short but informative entries for early classics.

ALAN J. MAYNE, formerly a Senior Research Fellow at University College, London, was educated at Winchester and New College, Oxford. His previous works include Linked Local Area Networks (1986), The Videotex Revolution (2nd ed., 1987), and Into the 21st Century: A Handbook for a Sustainable Future (1991).