Action Art: A Bibliography of Artists' Performance from Futurism to Fluxus and Beyond (Art Reference Collection #16) (Hardcover) 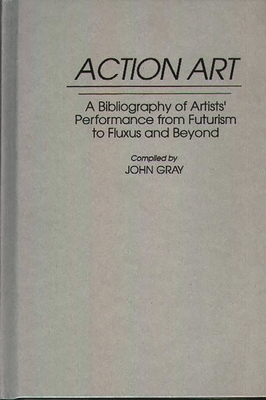 Action Art: A Bibliography of Artists' Performance from Futurism to Fluxus and Beyond (Art Reference Collection #16) (Hardcover)

This comprehensive international bibliography is the first to attempt documentation of this diverse field, covering the history of Artist's Performance. It focuses on its early twentieth-century antecedents in such movements as Futurism, Dada, Russian Constructivism, and the Bauhaus as well as its peak period in the 1950s, 1960s, and 1970s with such developments as Gutai, Fluxus, Viennese Actionism, Situationism, and Guerrilla Art Action. Major emphasis is also given to sources on 115 individual performance artists and groups. More than 3700 entries document print and media materials dating from 1914 to 1992. Organized for maximum accessibility, the sources are also extensively cross-referenced and are indexed by artist, subject, title, and author. Three appendices identify reference works, libraries, and archives, and addenda material not found in the book text, and two others list artists by country and by group or collective.

JOHN GRAY is currently director of the Black Arts Research Center in Nyack, New York. His previous publications include: Fire Music: A Bibliography of the New Jazz, 1959-1990 (1991), African Music (1991), Blacks in Film and Television: A Pan-African Bibliography of Films, Filmmakers, and Performers (1991), Black Theatre and Performance: An African Bibliography (1990), Ashe, Traditional Religion and Healing in Sub-Saharan Africa and the Diaspora (1989), and Blacks in Classical Music (1988), all published by Greenwood Press.