The Sioux and Other Native American Cultures of the Dakotas: An Annotated Bibliography (Bibliographies and Indexes in Anthropology #8) (Hardcover) 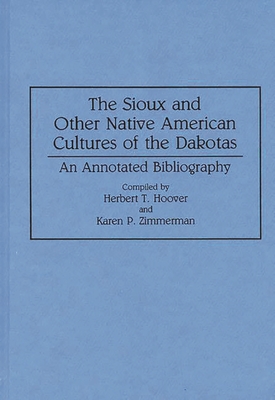 The Sioux and Other Native American Cultures of the Dakotas: An Annotated Bibliography (Bibliographies and Indexes in Anthropology #8) (Hardcover)

This volume focuses on the Native American cultures that have existed across the Dakotas in relative isolation from external influences. A chapter entitled Prehistory contains citations for items comprising information about Sioux and other Indian communities derived from archaeological and anthropological analysis. Another, entitled Profile of Traditional Cultures in the Sioux Federation, includes sighting reports and other narratives regarding the habits and beliefs of Sioux people that have been little affected by outsiders. A third chapter directs users to sources about Sioux spirituality. The following chapter contains a report on sources of information about Sioux people published outside the United States. The final chapter includes materials on Sioux language and winter counts. This volume will be especially valuable to teachers and researchers with specific interests in tribal cultures. The indexes are cross-referenced to their companion volume South Dakota History, which provides an indepth bibliographical review of the literature on the state and white-Indian relations.