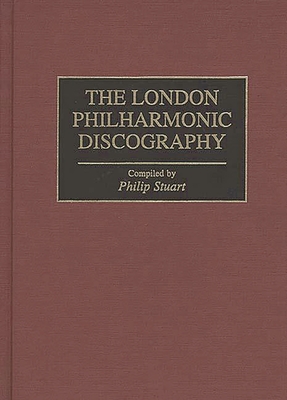 This great London orchestra made its debut in a recording session shortly before its first public concert in 1932 and now has well over a thousand recordings to its credit. All are dated and detailed for the first time in this meticulous study researched from primary sources. Commercial sessions account for most of the 1300 entries, but the main chronological sequence also includes live recordings and videos. Copious indexing allows access to the main chronological listings via performers, repertoire, record companies, or locations. The study can also be read as a cross-section of the work of the classical recording industry.

Appendixes cover film soundtracks, recordings made by the London Philharmonic Choir independently of the orchestra, controversial attributions, and principal players in the orchestra. Indexes of (and notes on) the recorded repertoire, conductors who have recorded with the orchestra, and the studios, halls, and churches used as recording venues are supplemented by a comprehensive general index of soloists, singers (including full casts of operas), producers, engineers, and recording companies, giving easy access to a wealth of information, most of which has previously been unpublished.

PHILIP STUART is an independent discographer./e After reading Modern History at Oxford and teaching for eighteen years at Bexley Grammar School, he retired to pursue his hobbies. His first published discography, on Igor Stravinsky (Greenwood, 1991), won the Association for Recorded Sound Collections 1992 Award for Best Research in the Field of Recorded Classical Music.