French Women Playwrights of the Twentieth Century: A Checklist (Bibliographies and Indexes in Women's Studies #24) (Hardcover) 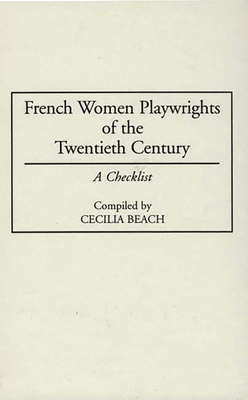 French Women Playwrights of the Twentieth Century: A Checklist (Bibliographies and Indexes in Women's Studies #24) (Hardcover)

This checklist is witness to the vast and varied production of 20th-century French women playwrights. Like Beach's preceding volume, French Women Playwrights Before the Twentieth Century: A Checklist (Greenwood, 1994), this reference book presents an extensive list of dramatic works. Beach provides biographical information about the authors when known, as well as name variations (pseudonyms, maiden name, other marriages, etc.)

The plays are listed chronologically under each author's name, followed by a variety of information about each work: genre, the place and date of publication and performances, and the location of over 2000 texts in published or manuscript form in French holding libraries. The checklist also includes a title index and a bibliography. This book provides a useful research tool not only for scholars interested in drama and/or women's literature, but also for theatre professionals.

Cecilia Beach received her PhD in French literature from New York University and is currently teaching at Ripon College in Wisconsin. She has also published French Women Playwrights Before the Twentieth Century: A Checklist (Greenwood 1994).