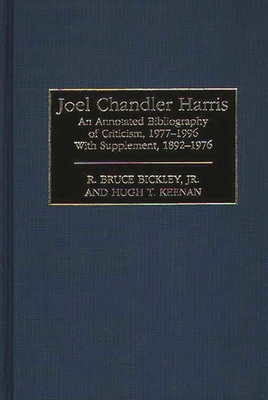 Joel Chandler Harris was internationally famous in his own time and has a surprisingly broad scholarly and popular following in ours. His portraits of slaves and former slaves, particularly Uncle Remus and Free Joe, poor whites, and Brer Rabbit, the archetypal trickster hero, have influenced many other writers, including Mark Twain, Charles Chesnutt, William Faulkner, Ralph Ellison, Toni Morrison, and a wide array of children's authors from Beatrix Potter to A. A. Milne. Harris also left a lasting mark on popular culture, most clearly manifested through Disney's ISong of the South R and at Disney World attractions featuring versions of Harris's characters. He singlehandedly preserved and made internationally famous the Brer Rabbit folktales, the largest body of African American oral folklore that the world has ever known. Additionally, Harris was a major New South journalist who accelerated the process of reconciliation between North and South and promoted racial tolerance after the Civil War.

This reference book is a complete bibliographic guide to the scholarly response to Harris during the last two decades. The introduction explores such issues as Harris's renderings of black dialect, Southern character, and folklore, and his influence on popular culture. The first part is a supplement to Bickley's earlier bibliography of Harris, which covered the period 1862-1976. The second part provides more than 300 entries for books, articles, and dissertations about Harris published after 1976. Entries are grouped in sections according to year of publication, and then alphabetically within each section. Each entry is fully annotated, and a detailed index concludes the volume.