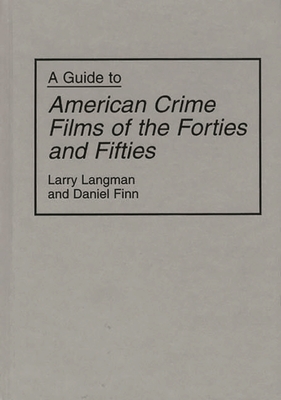 The only comprehensive guide to the crime films of the forties and fifties, this volume focuses on the major events that shaped and molded the genre: war, alienation, drugs, and organized crime. The body of the work offers over 1,200 entries that feature concise summaries, analyses, and credits. The volume is a continuation of the author's earlier work, A Guide to American Crime Films of the Thirties (Greenwood, 1995). The book includes those stars that the public had already embraced as gangsters in the thirties such as James Cagney, Humphrey Bogart, and Edward G. Robinson and brings them into a new era in which they are transformed into enforcers of the law. This work will be of interest to scholars, students, and film buffs alike.

The work demonstrates the shift from the simpler gangster modes of the 1930s as it takes the reader forward to the more sophisticated films of the late fifties. Although the book is organized alphabetically, the introduction alerts the reader to the major social phenomena that influenced the genre of these decades. Also offered are credits that cover titles, release dates, distributors, directors, screenwriters, and major players. The 1,200 entries include detailed plot summaries and thematic analyses as well as relevant information on sources, remakes, and sequels.