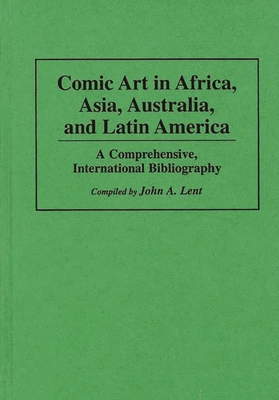 This is book number 7 in the Bibliographies and Indexes in Popular Culture series.

Journeying through the comic art worlds of Africa, Asia, Australia, and Latin America, one cannot help being deeply impressed with the longevity, magnitude, and versatility of their cartooning traditions. This is the fourth title in Lent's definitive bibliography of comic art worldwide--the series includes over 30,000 citations. The current volume covers 67 countries on the various continents. The 6,506 items here comprise the richest lode of research materials on comic art in these regions. Three famous cartoonists from Asia (Abu Abraham), Africa and the Middle East (Effat), and the Caribbean (Ares) provide interesting perspectives on their regions in separate forewords.

The work is divided by regions, countries, and topics, and, like the others in the series, includes citations in many languages and in published and unpublished formats. The other three volumes are Animation, Caricature, and Gag and Political Cartoons in the United States and Canada; Comic Art of Europe; and Comic Books and Comic Strips in the United States, all published by Greenwood in 1994. Early reviews of these volumes include statements such as, incredible...monumental task that gets] the art form's reference files in order and you've set the study of comics ahead by about ten years.