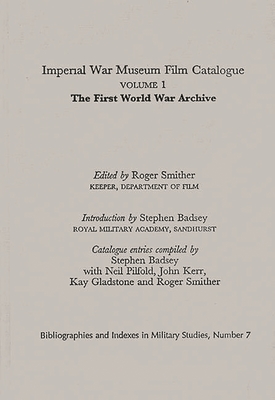 The First World War film archive at the Imperial War Museum, London, is one of the oldest in the world, celebrating its 75th anniversary in 1994. It comprises official films produced by Great Britain, Canada, Australia, and New Zealand during the First World War. This new catalog, compiled by members of the Museum's staff, covers all of the 1217 items found in the First World War collection. Among this collection are full-length documentary films, shorter documentaries and newsreels, instructional and propaganda material, and animation, the majority of which is unique. It covers the battlefields and the home front, providing invaluable material for a full understanding of the history of the Great War in all its aspects. It traces many early stages in the evolution of combat camerawork and the effective film coverage of war.

Each entry includes a film title, physical description (date, length, language, etc.), production details, a synopsis of the contents, notes, and references. Indexes offer access by film title, by personal name (both of those credited with film production and of those appearing in films), by geographical location, by event name, by military unit, and by ship name. The wide appeal of this important catalog will embrace film and military historians, historians of film propaganda, researchers, film-makers, and broadcasters.

ROGER SMITHER is Keeper in the Department of Film, Imperial War Museum, London.