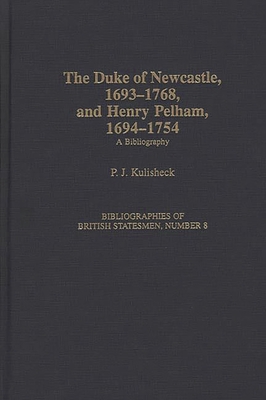 Chief ministers in 18th century Britain, the Pelham brothers guided Britain through the War of the Austrian Succession and the Seven Years' War. Yet it is only in the second half of the the 20th century that historians have confirmed their importance. Designed to facilitate research on the Pelhams, this is the first bibliography devoted to material on these two ministers. The work covers their personal papers and other manuscript collections as well as contemporary memoirs, diaries, and correspondence. Relevant books and articles, illustrating all aspects of the brothers' lives and careers, are arranged topically and annotated. The volume also includes information on material, such as microfilmed manuscripts, outside the United Kingdom.

P. J. KULISHECK is a lecturer in history at the University of Minnesota, Minneapolis. She became interested in the Pelham brothers while doing research for her doctoral dissertation.