Ethnic and Vernacular Music, 1898-1960: A Resource and Guide to Recordings (Discographies #62) (Hardcover) 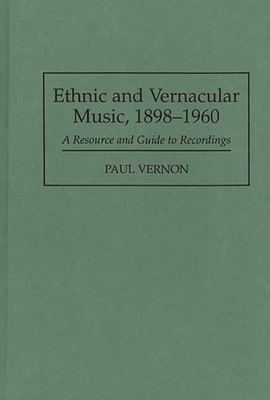 Ethnic and Vernacular Music, 1898-1960: A Resource and Guide to Recordings (Discographies #62) (Hardcover)

Detailed information on almost all ethnic and vernacular recordings from many countries on 78rpm is provided in this seminal work. The current state of discographical research in this wide and varied field is such that a research tool of this nature is badly needed. Jesse Walter Fewkes and Mary Hemenway recorded Native American music as early as 1890; Bela Bartok recorded rural music in the Balkans; Erich von Hornbostel, the grand old man of ethnomusicology in Europe, recorded in Southeast Asia. More than just a discography, this work demonstrates that cultures around the world and over time have more similarities than differences. A necessity for scholars, students, archivists, and individual record collectors and dealers.

The goals of this volume are many and varied: to promote thought and discussion toward a concise definition of recorded ethnic music; to assist specialists working on individual discographical projects; to introduce users to the interconnectedness of cultures through regional music; to gather heretofore disparate pieces of information under one cover in a way that for the first time allows specialists to accurately identify all manner of recordings in many languages. The four sections of the volume work together for easy usage through cross referencing. The philosophy behind the volume was expressed by Rodney Gallop when he remarked that music, for him, was often the key to the understanding of other cultures.

PAUL VERNON is a freelance music consultant in England. He has been involved in the music business for 20 years, writing articles, editing magazines, and programming re-releases of vintage and ethnic music on compact discs. He hopes this seminal work will be the catalyst that helps committed record collectors share their personal knowledge unselfishly with fellow researchers.