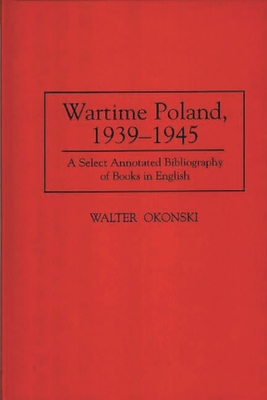 Over the past decades wartime Poland has received considerable attention from Anglo-American historians, with hundreds of works being published on Poland's role in World War II. Yet this copious material has lacked comprehensive bibliographic coverage. This book fills that gap, providing a quick source of information for researchers looking for English-language sources. Addressing diverse aspects of Poland's role in the war, the book contains sources on causes of the war, its course, and military, diplomatic, and legal concerns. Emphasizing the social impact of the war, the book discusses the occupation, the Holocaust, the consequences of the war and the Polish question. Included are works that set the issues in a broader international context and that present all sides of the argument.

The first bibliography of its kind, this work includes over 350 significant English-language monographs, books, book chapters, and government documents published from 1940 to 1996. The book is a practical reference guide for researchers interested in the European aspects of World War II.

WALTER OKONSKI is a bibliographer at LS, Inc., New York, where he is responsible for bibliographic processing of documents in English and East European languages. He received degrees in library science from the University of Wroclaw, Poland, and the Graduate School of Library and Information Studies at the City University of New York.