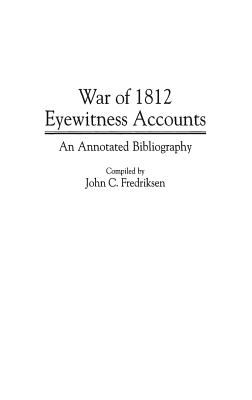 Once regarded as a backwoods frontier skirmish, the War of 1812 has become an object of increasing historical scrutiny. A new consensus is emerging among scholars which views the Second War with England as a defining moment in the history of North America. This reference tool enables users to view this important conflict from a variety of American, British, and Canadian perspectives. Compiled by a recognized authority, this bibliography describes over 850 printed primary sources, including letters, diaries, journals, and memoirs. In addition to the usual army and navy accounts, the book also includes narratives by women, clergy, politicians, diplomats, merchants, and Native Americans.

This volume is specifically designed to direct users to select historical data quickly and easily. Topically, it consists of three sections, covering military, naval, and civilian narratives. Each entry has detailed annotation, discussing bibliographic information, names and dates of the author, the time period covered, the writer's rank, organization, or social position, and the historical places and events mentioned in passing. Inclusive in scope and highly detailed, this bibliography is a valuable addition to any historical collection.

JOHN C. FREDRIKSEN, Ph.D., an independent scholar and researcher, has compiled four military history bibliographies, including Shield of Republic/Sword of Empire: A Bibliography of U.S. Military Affairs, 1783-1846 (Greenwood, 1990) and Free Trade and Sailors' Rights: A Bibliography of the War of 1812 (Greenwood, 1985), and has edited 20 War of 1812 diary and letter collections. He holds a doctorate in American history from Providence College.