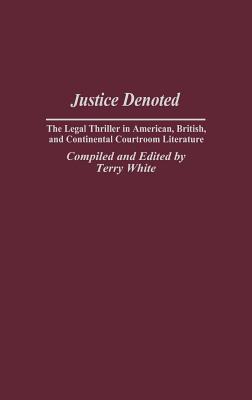 White provides the most comprehensive scholarly compilation of fictional work of legal suspense in existence. Primarily a bibliography of novels, it also annotates plays, scripts for film and television, novelizations, and short-story collections about lawyers and the law. The idea behind the principal of selection is to disdain labels that reduce the variety of the legal thriller to a subgenre of mystery fiction. Novels that range from suspense thrillers through science fiction to the philosophical novel are included if justice is thematically important. It is therefore an eclectic reference source beyond a compilation of books about lawyers as protagonists. Its biographical and scholarly information about authors, major and minor, and their novels or works is traditionally encyclopedic and objective regardless of whether the work has been genre-defined, or worse--deified as a classic or denigrated as a bestseller. Many novels included are long out of print, but historically interesting for their contribution to the lineage of the courtroom drama, showing that the history of the legal thriller is one of the major branches of modern literature since the Age of Reason.

The criterion of justice denoted moves beyond the fact of lawyers and courtrooms to select seminal novels like Robert Travers' Anatomy of a Murder as well as the romantic potboiler. Among the more than 2,000 works are the Perry Mason novels of Erle Stanley Gardner, John Mortimer's Rumpole series, along with a staple of fiction by major authors of the genre like John Lescroart, Lisa Scottoline, Margaret Maron, Scott Turow, and John Grisham. There are also individual works by Shakespeare, Goethe, Kafka, Camus, and Twain delineating humanity's obsession with the law as its shining prop of civilization and, alternative, b te-noire of the common individual caught up in its maw. The appendices include comments by lawyer-novelist Michael A. Kahn, a historical introduction to the legal thriller, craft notes by writers and prominent trial lawyers responding to author and lawyer questionnaires, bibliography of critical sources and articles, series characters, and the legal terminology found in courtroom dramas and novels. An essential reference tool for scholars, researchers as well as the occasional reader of legal thrillers.

TERRY WHITE is Assistant Professor of English at Kent State Ashtabula. In addition to other published works, Professor White has authored or edited such works as Cloak and Dagger: An Annotated Guide to Spy Fiction (Greenwood Press, 1995) and The Sibling Society.