The Tokyo Trial: A Bibliographic Guide to English-Language Sources (Bibliographies and Indexes in Military Studies) (Hardcover) 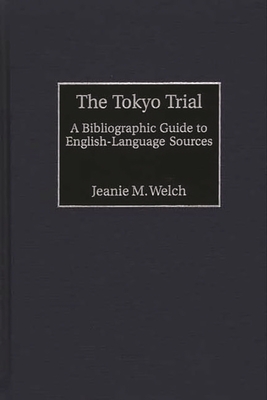 The Tokyo Trial: A Bibliographic Guide to English-Language Sources (Bibliographies and Indexes in Military Studies) (Hardcover)

Overshadowed for many years by the Nuremberg trials, the Tokyo Trial--one of the major events in the aftermath of World War II--has elicited renewed interest since the 50th anniversary of the war's end. Revelations of previously hidden war crimes, including comfort women and biological warfare, and the establishment of international courts to try Yugoslav and Rwandan war criminals have added to the interest. This bibliography addressees the renewed interest in the Tokyo Trial, providing over 700 citations to official publications, scholarly monographs and journal articles, contemporaneous accounts, manuscript collections, and Web sites. Also included are sources on the Trial's influence on international law and military law and unresolved issues being debated to this day.

Defining war crimes after the fact, practicing victor's justice to punish enemies, holding military commanders accountable for their troops' actions--these were issues confronted in the Tokyo Trial and other Asia-Pacific war crimes trials. They are still being investigated, researched, and debated today. This bibliography helps to illuminate these issues from different perspectives, providing a variety of ways to locate relevant English-language sources. The volume also includes citations to contemporary issues stemming from the Asia-Pacific war crimes trials--comfort women, biological warfare, and unresolved issues of reparations and official apologies. The book is a useful guide to sources on all aspects of the Tokyo Trial.

JEANIE M. WELCH is Professor and Reference Librarian at the University of North Carolina, Charlotte. She is the author of The Spice Trade: A Bibliographic Guide to Sources of Historical and Economic Information (Greenwood, 1994) and numerous articles in professional journals.