From Brass to Gold, Volume II: Discography of A&m Records and Affiliates Around the World (Discographies: Association for Recorded Sound Collections Di) (Hardcover) 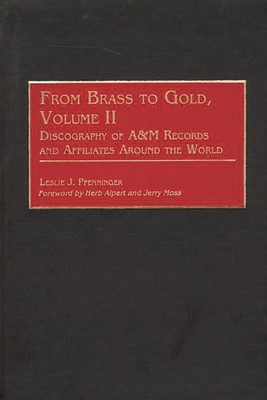 From Brass to Gold, Volume II: Discography of A&m Records and Affiliates Around the World (Discographies: Association for Recorded Sound Collections Di) (Hardcover)

From Brass to Gold Vol. II assembles A&M and affiliate discographies from 35 countries with major discographies for Great Britain, Canada, Germany and Japan. Artist and title indexes are provided for each country. This is the only international discography of A&M or it affiliates. Designed for record collectors, music lovers, music historians, and popular culture scholars and enthusiasts, and music retailers in discography format, it invites readers to research A&M, an affiliate, a record series or an individual artist.

LESLIE J. PFENNINGER is a freelance artist, writer, photographer, and regular contributor to record collectors guides. She is recognized as an authority on A&M Records and worked with the label for their 25th anniversary celebration which included an exhibit of memorabilia, commemorative book, and in cataloguing the vaults. She was a contributor to the industry book, A&M Records: The First 25 Years, The Official Prices Guide to Records (Tenth Edition), Compact Disc Collectibles Price Guide (2nd Edition), and Carpenters Kyodo Magazine Mook 21.