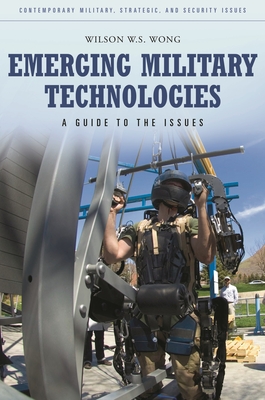 Emerging Military Technologies: A Guide to the Issues examines the potential of the United States to bring new technologies to deployment in the service of America's security and defense. The work also discusses how other international actors may regard the United States' investment in these high-tech capabilities, identifying possible resultant counter actions, and presents several divergent viewpoints on what the future may bring.

The book thoroughly explores three general categories of emerging technologies: autonomous computers, nanotechnology and biotechnology, and the interrelated topics of directed energy weapons and ubiquitous space access. Security studies expert Wilson W.S. Wong balances coverage of today's cutting-edge science and engineering with treatment of real-world concerns of effectiveness, military ethics, and international relations in the 21st century. An invaluable resource for members of the military and intelligence communities, this book also provides general readers with an accessible introduction to these highly technical topics.

Wilson W.S. Wong is a research fellow with the Centre for Defence and Securities Studies, University of Manitoba, Winnipeg, Canada. His first book, Weapons in Space: Strategic and Policy Implications, was Volume III in the Centre for Defence and Security Studies' Silver Dart Canadian Aerospace Studies series. He is also coauthor of Praeger's Military Space Power: A Guide to the Issues.