This Year You Write Your Novel (Paperback) 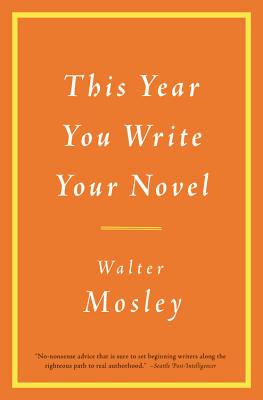 This Year You Write Your Novel (Paperback)


In Stock—Click for Locations
"A straightforward, friendly guide for aspiring writers" (Los Angeles Times): No more excuses. With award-winning author Walter Mosley as your guide, you can write a novel now.
"Let the lawn get shaggy and the paint peel from the walls," bestselling novelist Walter Mosley advises. In this invaluable book of tips, practical advice, and wisdom, Mosley promises that the writer-in-waiting can finish their novel in one year.

Intended as both inspiration and instruction, this book provides the tools to turn out a first draft painlessly and then revise it into something finer. Mosley teaches you how to:

"No-nonsense advice that is sure to set beginning writers along the righteous path to real authorhood." --Seattle Post-Intelligencer

Walter Mosley is one of America's most celebrated and beloved writers. A Grand Master of the Mystery Writers of America, he has won numerous awards, including the Anisfield-Wolf Award, a Grammy, a PEN USA's Lifetime Achievement Award, and several NAACP Image Awards. His books have been translated into more than twenty languages. His short fiction has appeared in a wide array of publications, including The New Yorker, GQ, Esquire, Los Angeles Times Magazine, and Playboy, and his nonfiction has been published in The New York Times Book Review, The New York Times Magazine, Newsweek, and The Nation. He is the author of Down the River unto the Sea. He lives in New York City.
"Walter Mosley has penned a marvelously encouraging and -- far more important -- useful guide to writing."—San Diego Union-Tribune