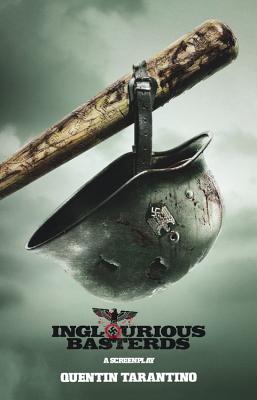 
Not On Our Shelves—Ships in 1-5 Days
From the most original and beloved screenwriter of his generation, the complete Oscar-nominated screenplay of Quentin Tarantino's World War II epic Inglorious Basterds.

From the brilliant writer/director behind the iconic films Pulp Fiction, Kill Bill, and Once Upon a Time in Hollywood, comes Tarantino's most ambitious movie: a World War II epic starring Brad Pitt and filmed on location in Germany and France.


The action tale follows the parallel story of a guerrilla-like squad of American soldiers called "The Basterds" and the French Jewish teenage girl Shosanna who find themselves behind enemy Nazi lines during the German occupation. When the Inglourious Basterds encounter Shosanna at a propaganda screening at the movie house she runs, they conspire to launch an unexpected plot to end the war. Pitt plays Lieutenant Aldo Raine -- the leader of the Basterds. Raine is an illiterate hillbilly from the mountains of Tennessee who puts together a team of eight Jewish-American soldiers to hunt down the Nazis.


Filled with Tarantino's trademark electric dialogue and thrilling action sequences, Inglourious Basterds is one of the most celebrated films of the twenty-first century.
Quentin Tarantino is a film director, screenwriter, producer, and actor known for his hugely popular films Pulp Fiction, Django Unchained, Kill Bill and Reservior Dogs, among others.

Tarantino's films have garnered both critical and commercial success. He has received many industry awards, including two Academy Awards, two Golden Globe Awards, two BAFTA Awards and the Palme d'Or, and has been nominated for an Emmy and a Grammy.