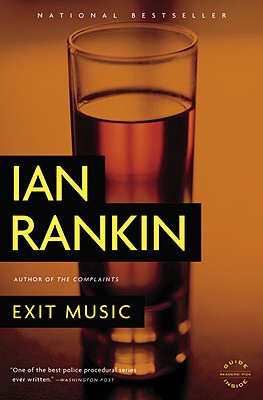 This is book number 17 in the A Rebus Novel series.

“When Exit Music begins, Ian Rankin's Detective Inspector John Rebus has 10 days until retirement. Will he solve the latest crime to land on his desk? Will he stay out of the line of fire of his superiors? Will he wrap up the loose ends of a long career fighting crime? Will he find a life after retirement? Stay tuned.”
— Ray Nurmi, Snowbound Books, Marquette, MI

It's late in the fall in Edinburgh and late in the career of Detective Inspector John Rebus. As he is simply trying to tie up some loose ends before his retirement, a new case lands on his desk: a dissident Russian poet has been murdered in what looks like a mugging gone wrong.

Rebus discovers that an elite delegation of Russian businessmen is in town, looking to expand its interests. And as Rebus's investigation gains ground, someone brutally assaults a local gangster with whom he has a long history.

Has Rebus overstepped his bounds for the last time? Only a few days shy of the end to his long, controversial career, will Rebus even make it that far?
Ian Rankin is a #1 international bestselling author. Winner of an Edgar Award and the recipient of a Gold Dagger for fiction and the Chandler-Fulbright Award, he lives in Edinburgh, Scotland, with his wife and their two sons.
"In the Rebus novels he's provided a portrait of his chosen city that's as rich, detailed and loving as any that any crime writer working today has given us of any city in the world. . . . This has been one of the best police procedural series ever written."—Patrick Anderson, Washington Post