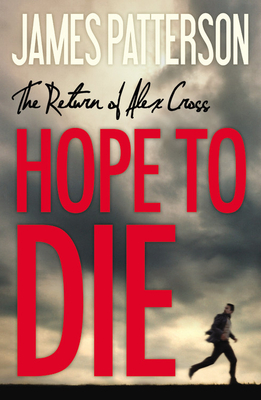 This is book number 20 in the An Alex Cross Thriller series.

Detective Alex Cross is being stalked by a psychotic genius, forced to play the deadliest game of his career.
Cross's family-his loving wife Bree, the wise and lively Nana Mama, and his precious children-have been ripped away. Terrified and desperate, Cross must give this mad man what he wants if he has any chance of saving the most important people in his life. The stakes have never been higher: What will Cross sacrifice to save the ones he loves?
Widely praised by the greatest crime and thriller writers of our time, Cross My Heart set a jaw-dropping story in motion. Hope to Diepropels Alex Cross's greatest challenge to its astonishing finish, proving why Jeffery Deaver says "nobody does it better" than James Patterson.
James Patterson has had more New York Times bestsellers than any other writer, ever, according to Guinness World Records. Since his first novel won the Edgar Award in 1977 James Patterson's books have sold more than 300 million copies. He is the author of the Alex Cross novels, the most popular detective series of the past twenty-five years, including Kiss the Girls and Along Came a Spider. He writes full-time and lives in Florida with his family.

"Behind all the noise and the numbers, we shouldn't forget that no one gets this big without amazing natural storytelling talent--which is what James Patterson has, in spades. The Alex Cross series proves it."--Lee Child

"Twenty years ago, I wrote, 'Along Came a Spider is the best thriller I've come across in many a year. It deserves to be this season's #1 bestseller and should instantly make James Patterson a household name.' A household name, indeed."--Nelson DeMille

"It's no mystery why James Patterson is the world's most popular thriller writer: his uncanny skill in creating living, breathing characters we truly feel for and seamless, lightning-fast plots. I do this for a living, and he still manages to keep me guessing from the first to last page. Simply put: Nobody does it better."--Jeffery Deaver

"Alex Cross is one of the best-written heroes in American fiction, and each Cross novel further defines what it means to be a professional, a husband, a father, and above all, a man."--Lisa Scottoline

"Twenty years after the first Alex Cross story, he has become one of the greatest fictional detectives of all time, a character for the ages."--Douglas Preston & Lincoln Child