Hornblower and the Hotspur (Paperback) 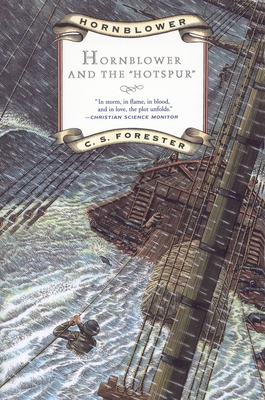 Hornblower and the Hotspur (Paperback)

This is book number 3 in the Hornblower Saga (Paperback) series.

Hornblower's reconnaissance mission quickly turns to warfare in this installment of the beloved series of naval adventures by C. S. Forester, "a master of the genre" (New York Times).

April 1803. The Peace of Amiens is breaking down. Napoleon is building ships and amassing an army just across the Channel. Horatio Hornblower -- who, at age twenty-seven, has already distinguished himself as one of the most daring and resourceful officers in the Royal Navy -- commands the three-masted Hotspur on a dangerous reconnaissance mission that evolves, as war breaks out, into a series of spectacular confrontations.
All the while, the introspective young commander struggles to understand his new bride and mother-in-law, his officers and crew, and his own "accursed unhappy temperament" -- matters that trouble him more, perhaps, than any of Bonaparte's cannonballs.
C. S. Forester (1899-1966) wrote many highly acclaimed novels, including the eleven-volume Hornblower saga and The African Queen.
"No other contemporary writer can equal Forester at this kind of storytelling."—Chicago Tribune

"With meticulous attention to nautical detail, which no committee of old sea dogs has been able to fault, C. S. Forester has shown himself to be a master of the genre."—New York Times Book Review