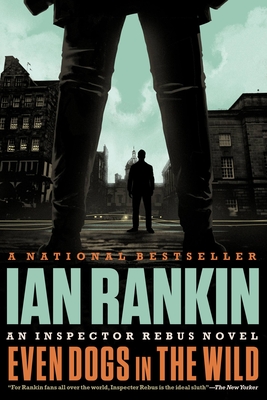 This is book number 20 in the A Rebus Novel series.

Rebus comes out of retirement...to save his nemesis.

Detective Inspector Siobhan Clarke is feeling the heat. She's investigating the death of a senior government prosecutor, David Minton, who has friends in high places. When one of their own is killed, the powers that be want answers fast. But Clarke is puzzled: if Minton died in a robbery as everyone thinks, why is nothing missing from his home? The answer may lie not in what was taken, but in what was left behind at the scene -- an ominous note.

Malcolm Fox is feeling useless. Shunned by his colleagues because of his past in the Complaints bureau, he's been reassigned to a grunt detail, helping a surveillance team -- one that trusts him even less than his own boss does -- track a notorious Glasgow crime family. Helping Clarke with the Minton case is the only thing that makes Fox feel like a real cop.

Newly minted civilian John Rebus is feeling restless. Being a cop is in his blood and he's failing miserably at retirement. So when Clarke and Fox ask for his help, Rebus doesn't need long to consider his options. But before he can get his bearings, a call comes from Rebus's old nemesis -- "Big Ger" Cafferty. Someone just fired a bullet through his front window -- and sent him a note identical to Minton's. The normally unflappable old gangster is on edge, but for the life of him Cafferty can't figure out who he's wronged. And the only man he trusts with his life is Rebus.

As the cases collide, it's up to Clarke, Fox, and Rebus to connect the dots and save their unlikely ally Cafferty, whose past harbors a shocking secret that implicates Minton's friends in an unspeakable crime. Even Dogs in the Wild reunites crime fiction legend Ian Rankin's greatest characters in an explosive story exploring the darkest corners of our desires.
Ian Rankin is a #1 international bestselling author. Winner of an Edgar Award and the recipient of a Gold Dagger for fiction and the Chandler-Fulbright Award, he lives in Edinburgh, Scotland, with his wife and their two sons.
PRAISE FOR THE BEAT GOES ON:

"Rankin's canny cop is as gray and dour as his Edinburgh beat, but he's in fine form in these clever, occasionally touching, and often wryly funny vignettes."—Kirkus Reviews

"All of the stories are tightly wrought and entertaining. He moves ahead at great speed to deliver work that is potently inspiring, bringing readers a gem in each one...Rankin fans should add this tome to their other books in the series immediately."
—Barbara Lipkien Gershenbaum, BookReporter

"It's a very welcome return for Rebus that should tide fans over--until his next full novel comes out."
—Laura DeMarco, Cleveland Plain Dealer

"...one of the great literary crime solvers of our time...Rebus is a Van Morrison kind of detective...Put THE BEAT GOES ON in your guest room for the pleasure of a traveler, weary or insomniac, who needs a stout companion for an evening's adventure."
—Jim Higgins, Milwaukee Journal Sentinel

"...sharply crafted...the book has a pleasing, offbeat rhythm of its own."
—Lloyd Sachs, Chicago Tribune

"sharply observed, economically written stories...for Rankin fans used to a regular diet of Rebus, this collection makes up for the year off the author took after the 2013 novel Saints of the Shadow Bible. For the uninitiated with short attention spans interested in sampling one of the finest crime fiction practitioners going, it's an excellent place to start."—Dan DeLuca, Philadelphia Inquirer