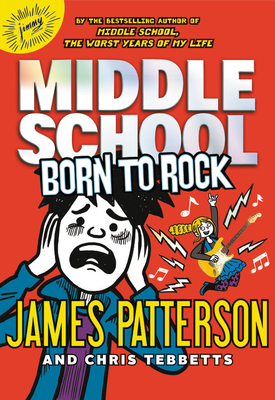 This is book number 11 in the Middle School series.

In the next book in James Patterson's bestselling Middle School series, Rafe Khatchadorian's hilarious little sister, Georgia, is back for another rollicking adventure!
It's not easy being Rafe Khatchadorian's sister. He's got quite a reputation around school, and Georgia's got it hard enough as is! With a super secret crush on her classmate Sam Marks, a Rube Goldberg machine challenge to dominate, and constant confrontations with vicious Missy Trillin and her evil Princess Patrol to look forward to, Georgia can't help but throw all her energy into the one thing that makes her happy: her kick-butt, all-girl rock band, We Stink!
When Georgia's favorite rock band, Lulu and the Handbags, advertise a major music competition where the winner gets to jam with Lulu herself, Georgia will pull all the stops to make sure We Stink wins--even if it means asking her annoying older brother, Rafe, for help! Will his crazy ideas work, or land her in serious trouble?
James Patterson is the world's bestselling author. He has donated more than one million books to students and soldiers, as well as millions of dollars to independent bookstores and school libraries. He lives in Florida with his family.

* "As Patterson artfully weaves a deeper and more thought-provoking tale of childhood coping mechanisms and everyday school and family realities, readers are drawn into a deeper understanding of and compassion for the main characters."—School Library Journal, starred review

"A keen appreciation of kids' insecurities and an even more astute understanding of what might propel boy readers through a book.... a perfectly pitched novel."—Los Angeles Times

"It's a chatty, funny, engaging book.... filled with energetic cartoons... that will appeal to your little rebel, depicting teachers as dungeon-keepers, matadors and flying dragons. Patterson... knows how to structure a plot and builds in some surprising--even touching--twists.... Rafe is the bad boy with a heart of gold."—New York Times

"The book's... dynamic artwork and message that 'normal is boring' should go a long way toward assuring kids who don't fit the mold that there's a place for them, too."—Publishers Weekly

"Incredibly detailed and imaginative illustrations... add depth and humor.... an enjoyable story that even the most reluctant readers should enjoy."—Library Media Connection

"There is substance as well as appeal here.... Patterson deftly manages the pace of revelations that take readers deeper into Rafe's fragile trust.... Readers ready for something else in the same vein but more substantive than Kinney's Diary of a Wimpy Kid or Peirce's Big Nate should be introduced to Rafe."—The Bulletin