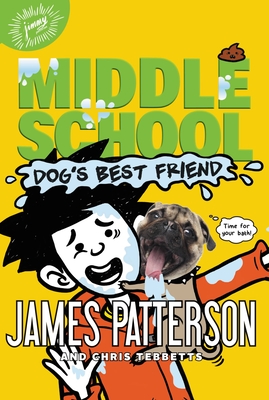 This is book number 8 in the Middle School series.

Discover the series that inspired the Middle School movie with this hilarious installment of James Patterson's hit series starring everyone's favorite underdog, with non-stop laughs on every page.
It's a dog-eat-dog world, and Rafe Khatchadorian is just trying to live in it. Life in middle school is finally starting to seem bearable-until Rafe spots his grandmother standing on the free-meal line at the local soup kitchen. In order to help bring in more money, Rafe concocts a brilliant plan: a dog-walking business that soon turns into a huge money-making neighborhood empire. He'll even have extra cash to buy his own WormHole Deluxe Multi-Platform GameBox!
That is, until two terrible twins launch the Great Dog War by sabotaging Rafe's flyers and stealing his customers. Plus, his bratty kid sister Georgia has skipped a grade, so now she's in all of Rafe's classes. Throw a kid a bone!

James Patterson received the Literarian Award for Outstanding Service to the American Literary Community at the 2015 National Book Awards. He holds the Guinness World Record for the most #1 New York Times bestsellers, including Middle School and I Funny, and his books have sold more than 325 million copies worldwide. A tireless champion of the power of books and reading, Patterson has created a new children's book imprint, JIMMY Patterson, whose mission is simple: "We want every kid who finishes a JIMMY Book to say, 'PLEASE GIVE ME ANOTHER BOOK.'" He has donated more than one million books to students and soldiers and funds over four hundred Teacher Education Scholarships at twenty-four colleges and universities. He has also donated millions to independent bookstores and school libraries. Patterson will be investing his proceeds from the sales of JIMMY Patterson Books in pro-reading initiatives.