The Mysterious Benedict Society and the Riddle of Ages (Paperback) 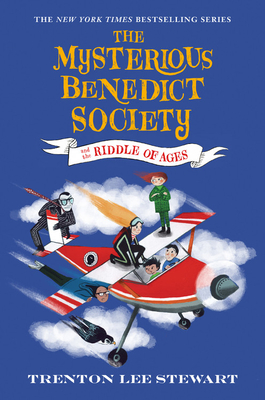 The Mysterious Benedict Society and the Riddle of Ages (Paperback)

This is book number 4 in the The Mysterious Benedict Society series.

The brilliant and beloved gang from the New York Times bestselling series is back -- and ready to face new threats, dangerous dilemmas, and irresistible adventures.
The Mysterious Benedict Society is a modern classic, drawing comparisons to J.K. Rowling and Roald Dahl, named a Time magazine "Best Young Adult Book of All Time," and selling over three million copies. Some time has passed since the inimitable quartet of Reynie, Sticky, Kate, and Constance have had a mission together. But with the arrival of a new Society member -- and a new threat -- they must reunite to face dilemmas more dangerous than ever before, including the villainous Mr. Curtain and a telepathic enemy tracking their every move, not to mention a dramatically preteen Constance.
In its triumphant return, the Society encounters all new challenges, but the series' trademark sly humor, sweet camaraderie, hairsbreadth escapes, and mind-bending puzzles are all as engaging as ever. Fans of the series will be thrilled to see the Society has grown up a little with them, while a new generation of readers will fall in love with this irresistible series.
Trenton Lee Stewart is the author of the award-winning and New York Times bestselling Mysterious Benedict Society series and The Secret Keepers. He lives in Little Rock, Arkansas.
The Mysterious Benedict Society is back! The cast has aged, but the criminal contingency, amped-up action, and derring-do remain the same. Now teenagers, bright-bulb Reynie, intrepid Kate, and Sticky, he of the photographic memory, have the biggest fight ever on their hands. All of the bad guys from previous books (a baker's dozen of them) have returned with revenge on their minds and nefarious plans in their pockets, along with all sorts of instruments of evil. Also in attendance is the ever-contrary Constance Contraire... A welcome return full of the right stuff.—Booklist (Starred Review)