Magnitude: The Scale of the Universe (Hardcover) 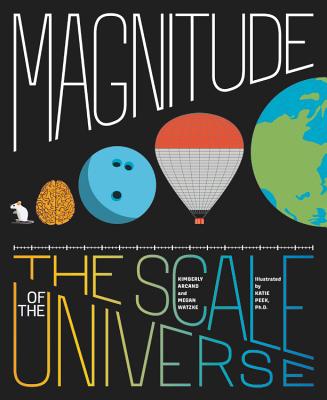 Magnitude: The Scale of the Universe (Hardcover)


Special Order—Subject to Availability
In the tradition of illustrated science bestsellers, like Thing Explainer andharkening back to the classic film The Powers of Ten, this unique, fully-illustrated, four-color book explores and visualizes the concept of scale in our universe.

In Magnitude, Kimberly Arcand and Megan Watzke take us on an expansive journey to the limits of size, mass, distance, time, temperature in our universe, from the tiniest particle within the structure of an atom to the most massive galaxy in the universe; from the speed at which grass grows (about 2 to 6 inches a month) to the speed of light. Fully-illustrated with four-color drawings and infographics throughout and organized into sections including Size and Amount (Distance, Area, Volume, Mass, Time, Temperature), Motion and Rate (Speed, Acceleration, Density, Rotation), and Phenomena and Processes (Energy, Pressure, Sound, Wind, Computation), Magnitude shows us the scale of our world in a clear, visual way that our relatively medium-sized human brains can easily understand.
Kimberly Arcand is the visualization lead for NASA's Chandra X-ray Observatory, specializing in image and meaning research, and in data representation. She lives near Providence, RI.

Megan Watzke is the press officer for NASA's Chandra X-ray Observatory, specializing in communicating astronomy with the public. She lives in Seattle, WA. Together, Arcand and Watzke are the authors of Light: The Visible Spectrum and Beyond.

Katie Peek began her career as an astrophysicist, searching for planets that circle distant stars and and investigating the history of our own Milky Way galaxy. After earning her Ph.D., she transitioned to science journalism and ultimately to data visualization and illustration. The former information graphics editor at Popular Science magazine, today she creates graphics for many publications, scientific and not.
"How big is big? How small is small? As an astronaut and citizen explorer, I love having someone explain some of the more puzzling aspects of our universe to me in terms that make sense. With Magnitude, my brain cried "Eureka!" every time I turned the page."
—Cady Coleman, PhD, former NASAAstronaut

"We live in a universe bigger and smaller than our brains can fathom. Magnitude is an enjoyable and essential guide to appreciating our place among it all."—Joe Hanson, author and host of It's Okay to Be Smart

"Arcand and Watzke have crafted a masterpiece. A must-read for anyone wishing to appreciate the richness of the cosmos from its microscopic building blocks to its largest structures."—Avi Loeb, chair, Harvard Astronomy department

"Through clear text and illuminating illustrations, the authors tackle questions ranging from 'how does the mass of a human eyelash compare to the mass of the black hole at the center of our galaxy?' to 'how fast does a dentist's drill rotate?' A fascinating journey through the measure of all things."
—Mario Livio, astrophysicist, and author of Why?: What Makes Us Curious

"Magnitude brilliantly illustrates the relative scale of so many aspects of the universe that you will feel so much smarter about EVERYTHING after reading this!"—Curtis Wong, principal researcher, Microsoft Research