The Devil May Dance: A Novel (Paperback) 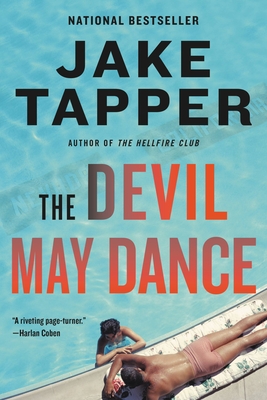 The Devil May Dance: A Novel (Paperback)

Charlie and Margaret discover the dark side of Hollywood in Jake Tapper's follow-up to New York Times bestseller The Hellfire Club—an "excellent" cocktail of corruption and ambition (Publishers Weekly).

Charlie and Margaret Marder, political stars in 1960s Washington DC, know all too well how the tangled web of power in the nation's capital can operate. But while they long to settle into the comforts of home, Attorney General Robert Kennedy has other plans. He needs them to look into a potential threat not only to the presidency, but to the security of the United States itself.

Charlie and Margaret quickly find themselves on a flight to sunny Los Angeles, where they’ll face off against a dazzling world of stars and studios. At the center of their investigation is Frank Sinatra, a close friend of President John F. Kennedy and a rumored mob crony, whom Charlie and Margaret must befriend to get the inside scoop. But in a town built on illusions, where friends and foes all look alike, nothing is easy, and drinks by the pool at the Sands and late-night adventures with the Rat Pack soon lead to a body in the trunk of their car. Before they know it, Charlie and Margaret are being pursued by sinister forces from Hollywood’s stages to the newly founded Church of Scientology, facing off against the darkest and most secret side of Hollywood’s power.

As the Academy Awards loom, and someone near and dear to Margaret goes missing, Charlie and Margaret find the clock is not only ticking but running out. Someone out there knows what they’ve uncovered and can’t let them leave alive. Corruption and ambition form a deadly mix in this fast-paced sequel to The Hellfire Club.
Jake Tapper is the author of The Hellfire Club, which is being turned into a TV series, and The Outpost, which became a celebrated film released in 2020. An award-winning anchor for CNN, he joined the network in January 2013. He lives in Washington, D.C., with his wife, daughter, and son.
“Frank Sinatra, Robert Kennedy and Charlie Marder — you can’t lose with this combination of characters in The Devil May Dance. Jake Tapper explores the thin lines between politics, pop culture and crime, and the story is always gripping, accurate and right on target when it comes to underlining that the past is prologue and politics are always played for keeps.”—Michael Connelly

"Tapper’s excellent sequel to 2018’s The Hellfire Club opens with a highly effective tease. . . .Tapper makes good use of the rich source material."

“One helluva a mystery—bursting with early-‘60s luminarios from Bobby Kennedy to Frank Sinatra and his swinging gang. Tapper effortlessly blends a journalist’s sharp eye with a storyteller’s keen sense of suspense: The result is as bracing as the bourbon the book's Rat Packers knock back and as fizzy as the champagne the Hollywood stars swig. Raise a glass.”—Gillian Flynn

"From the moment you enter The Hellfire Club's world of suspense and intrigue and sex and danger, you won't want to leave. The swampy world of 1954 Washington DC feels vividly relevant in our current day politics. A must read!"—Shonda Rhimes

"Jake Tapper's deep inside knowledge of power, greed and politics fuels this riveting page-turner. Warning: Don't start this book late at night unless you have no plans the next day." —Harlan Coben