The Berlin Shadow: Living with the Ghosts of the Kindertransport (Hardcover) 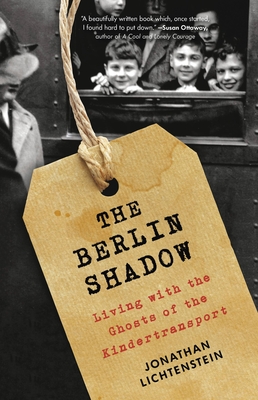 The Berlin Shadow: Living with the Ghosts of the Kindertransport (Hardcover)


On Our Shelves Now at:
A deeply moving memoir that confronts the defining trauma of the twentieth century, and its effects on a father and son.

In 1939, Jonathan Lichtenstein's father Hans escaped Nazi-occupied Berlin as a child refugee on the Kindertransport. Almost every member of his family died after Kristallnacht, and, upon arriving in England to make his way in the world alone, Hans turned his back on his German Jewish culture.

Growing up in post-war rural Wales where the conflict was never spoken of, Jonathan and his siblings were at a loss to understand their father's relentless drive and sometimes eccentric behavior. As Hans enters old age, he and Jonathan set out to retrace his journey back to Berlin.

Written with tenderness and grace, The Berlin Shadow is a highly compelling story about time, trauma, family, and a father and son's attempt to emerge from the shadows of history.
Jonathan Lichtenstein is Professor of Drama in the Department of Literature, Film, and Theatre Studies at the University of Essex. An award-winning playwright, Jonathan trained at Bretton Hall, and his work has been featured by the BBC and performed in theaters across the UK, as well as in Germany and off-Broadway. He lives in Wivenhoe, a village on the Essex Marshes, with his wife and three children.
"The Berlin Shadow is a haunting account of a journey of remembrance, discovery, and forgiveness. A beautifully written book which, once started, I found hard to put down."—Susan Ottaway, author of A Cool and Lonely Courage

“This is indeed a memoir, an effort to remember--and to unremember. Two damaged men—father and son—attempt to discover the origins of their own tense relationship, pockmarked by years of misunderstanding. Beginning in Wales (with a marvelous sensitivity about that province) then proceeding to Germany, from where Hans Lichtenstein, the father, had been shipped out to Great Britain for his safety in 1939, Jonathan Lichtenstein ties together delicately two of the most significant aspects of a narrative of memory: space and time. The Berlin Shadow details with an emphatic honesty the traumas visited on generations of Jews who survived the war, only to find themselves, once again, marginalized, unwanted, and despised. Hans needs to relive those last few years of freedom in Berlin and his adult son must untangle the skein of wounded feelings imprinted on him by a protective, but exigent father. Many will read The Berlin Shadow in one sitting, for the experiences of the two protagonists will demand a moral attention; an interrupted reading seems almost like a sacrilege.”—Ronald C. Rosbottom, professor at Amherst College, and author of When Paris Went Dark and Sudden Courage

“If you read one book this year, make it The Berlin Shadow. It is deeply moving, utterly compelling, touchingly funny and so beautifully written that at times it takes your breath away. It taught me so much about love, life, memory and time that I feel I have grown wiser and more appreciative of my own life because of it. Lichtenstein has a rare gift that I hope will be shared with readers all over the world. I cannot praise this book enough. Every adjective I come up with falls short. It’s beautiful.”—Santa Montefiore, author of The Secret Hours