Mutiny on the Bounty (Paperback) 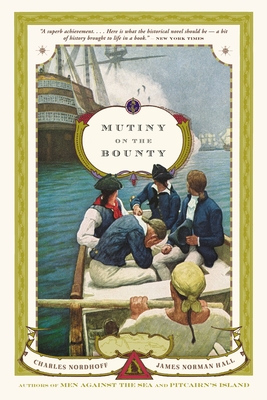 Mutiny on the Bounty (Paperback)


Not On Our Shelves—Ships in 1-5 Days
Mutiny on the Bounty is an "astounding sea tale" (New York Times) that thrills readers young and old with its action-packed account of treachery and survival in the South Pacific.
Cherished as one of the most thrilling sea adventures ever recorded, Mutiny on the Bounty has sold millions of copies and enthralled generations of readers around the world in the eight decades since its initial publication. The novel reprises a true story -- the strange, eventful, and tragic voyage of His Majesty's Ship Bounty in 1788-1789, which culminated in Fletcher Christian's mutiny against Captain Bligh -- and reaches peaks of narrative excitement that mark the book indelibly as a modern classic.
The story of the Bounty continues in Men Against the Sea and Pitcairn's Island.
"A superb achievement...Here is what the historical novel should be -- a bit of history brought to life in a book." --New York Times
"Nordhoff and Hall have knit action, romance, and adventure...The thread of fiction puts a pungent, refreshing tang into the bare narrative of the Bounty."—Christian Science Monitor

"A grand book, a great read...Incontestably the finest account of the Bounty story."—James A. Michener