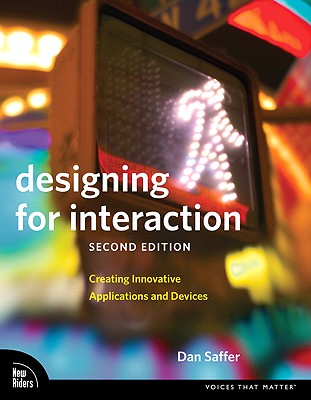 
Not On Our Shelves—Ships in 1-5 Days
Building products and services that people interact with is the big challenge of the 21st century. Dan Saffer has done an amazing job synthesizing the chaos into an understandable, ordered reference that is a bookshelf must-have for anyone thinking of creating new designs."
-- Jared Spool, CEO of User Interface Engineering Interaction design is all around us. If you've ever wondered why your mobile phone looks pretty but doesn't work well, you've confronted bad interaction design. But if you've ever marveled at the joy of using an iPhone, shared your photos on Flickr, used an ATM machine, recorded a television show on TiVo, or ordered a movie off Netflix, you've encountered good interaction design: products that work as well as they look. Interaction design is the new field that defines how our interactive products behave. Between the technology that powers our devices and the visual and industrial design that creates the products' aesthetics lies the practice that figures out how to make our products useful, usable, and desirable. This thought-provoking new edition of Designing for Interaction offers the perspective of one of the most respected experts in the field, Dan Saffer. This book will help you It also offers interviews and case studies from industry leaders on prototyping, designing in an Agile environment, service design, ubicomp, robots, and more.
Dan Saffer (San Francisco) is a founder and principal of Kicker Studio, a San Francisco-based design consultancy for consumer electronics, appliances, devices, and interactive environments, specializing in touchscreens and interactive gestures. In his "spare" time, he curates a site called No Ideas But In Things that collects physical interfaces for design inspiration. He also oversees a wiki for the collection of new interaction paradigms called Interactive Gestures.