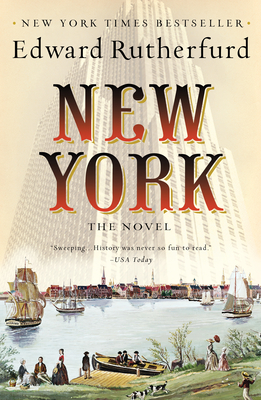 
In Stock—Click for Locations
Winner of the David J. Langum, Sr., Prize in American Historical Fiction

Edward Rutherfurd celebrates America’s greatest city in a rich, engrossing saga, weaving together tales of families rich and poor, native-born and immigrant—a cast of fictional and true characters whose fates rise and fall and rise again with the city’s fortunes. From this intimate perspective we see New York’s humble beginnings as a tiny Indian fishing village, the arrival of Dutch and British merchants, the Revolutionary War, the emergence of the city as a great trading and financial center, the convulsions of the Civil War, the excesses of the Gilded Age, the explosion of immigration in the late nineteenth and early twentieth centuries, the trials of World War II, the near demise of New York in the 1970s and its roaring rebirth in the 1990s, and the attack on the World Trade Center. A stirring mix of battle, romance, family struggles, and personal triumphs, New York: The Novel gloriously captures the search for freedom and opportunity at the heart of our nation’s history.
Edward Rutherfurd was born in Salisbury, England, and educated at Cambridge University and Stanford University in California. His first bestselling novel, Sarum, is based on the history of Salisbury and Stonehenge. Russka, his second novel, recounted the sweeping history of Russia. London tells the two-thousand-year story of the great city, bringing all of the richness of London’s past unforgettably to life. The Forest was set in England's ancient “New Forest.” A former resident of London and New York City, Edward Rutherfurd has had a home in Dublin for more than ten years. He has two children.

“In the tradition of James Michener, Rutherfurd unfurls more than three centuries of the city’s history as seen through the eyes of the descendants of [the] van Dyck and Master [families]—and the many other colorful characters he introduces along the way.”
—Detroit Free Press

“Incredible storytelling . . . Readers will fall in love with the iconic city.”
—The Post and Courier