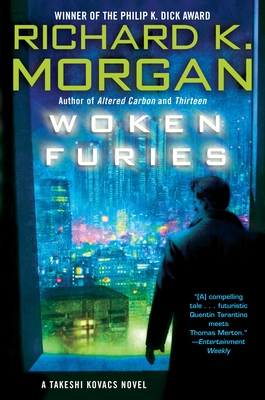 This is book number 3 in the Takeshi Kovacs series.

Mixing classic noir sensibilities with a searing futuristic vision of an age when death is nearly meaningless, Richard K. Morgan returns to his saga of betrayal, mystery, and revenge, as Takeshi Kovacs, in one fatal moment, joins forces with a mysterious woman who may have the power to shatter Harlan’s World forever.

Once a gang member, then a marine, then a galaxy-hopping Envoy trained to wreak slaughter and suppression across the stars, a bleeding, wounded Kovacs was chilling out in a New Hokkaido bar when some so-called holy men descended on a slim beauty with tangled, hyperwired hair. An act of quixotic chivalry later and Kovacs was in deep: mixed up with a woman with two names, many powers, and one explosive history.

In a world where the real and virtual are one and the same and the dead can come back to life, the damsel in distress may be none other than the infamous Quellcrist Falconer, the vaporized symbol of a freedom now gone from Harlan’s World. Kovacs can deal with the madness of AI. He can do his part in a battle against biomachines gone wild, search for a three-centuries-old missing weapons system, and live with a blood feud with the yakuza, and even with the betrayal of people he once trusted. But when his relationship with “the” Falconer brings him an enemy specially designed to destroy him, he knows it’s time to be afraid.

After all, the guy sent to kill him is himself: but younger, stronger, and straight out of hell.

Wild, provocative, and riveting, Woken Furies is a full-bore science fiction spectacular of the highest order—from one of the most original and spellbinding storytellers at work today.
Richard K. Morgan is the acclaimed author of The Cold Commands, The Steel Remains, Thirteen, Woken Furies, Market Forces, Broken Angels, and Altered Carbon, a New York Times Notable Book that also won the Philip K. Dick Award in 2003. The movie rights to Altered Carbon were optioned by Joel Silver and Warner Bros on publication, and a film version is currently in development with Mythology Entertainment. Market Forces was also optioned to Warner Bros, before it was even published, and it won the John W. Campbell Award in 2005. Thirteen won the Arthur C. Clarke Award in 2007 and is currently under movie option to Straight Up films. The Steel Remains won the Gaylactic Spectrum Award in 2010, and its sequel, The Cold Commands, appeared in both Kirkus Reviews’ and NPR’s Best Science Fiction/Fantasy Books of the Year lists. Morgan is a fluent Spanish speaker and has lived and worked in Madrid, Istanbul, Ankara, and London, as well as having traveled extensively in the Americas, Africa, and Australia. He now lives in Scotland with his wife, Virginia, and son, Daniel.
Praise for Richard K. Morgan

“Compelling . . . immensely entertaining . . . full of duplicitous characters, murky motives, and a detective who’s as tough as he looks.”
–The Philadelphia Inquirer

“Gritty and vivid . . . Looks as if we have another interstellar hero on our hands.”
–USA Today

“Clearly the work of a gifted, ambitious writer.”
–The Washington Post Book World