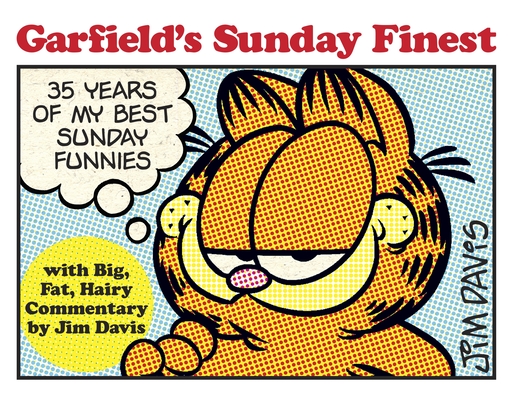 Thirty-five years of the best Garfield Sunday funnies—perfect for fans of the world’s favorite fat cat!

“Every Sunday morning, after doing the farm chores, Dad, Mom, Doc (yes, he’s real), and I would settle in with the Sunday paper for at least a half hour of chuckling, snorting, and laughing out loud.”—Jim Davis

Settle in with these Garfield Sunday funnies, handpicked and annotated by celebrated Garfield cartoonist Jim Davis. This special anniversary collection presents the comics in their full glory (complete with title and drop panels), along with an assortment of original sketches and never-before-seen rejected strips. It’s Garfield the fat cat in his Sunday finest!
Jim Davis was born on July 28, 1945, in Marion, Indiana. He later attended Ball State University in Muncie, Indiana, where he distinguished himself by earning one of the lowest cumulative grade point averages in the history of the university. The Garfield strip was born on June 19, 1978, syndicated in forty-one U.S. newspapers. Today it’s syndicated in more than 2,100 newspapers worldwide with more than 200 million readers, leading Guinness World Records to name Garfield The Most Widely Syndicated Comic Strip in the World. Davis has had many successes with Garfield, including four Emmy Awards for Outstanding Animated Program and induction into the Licensing Hall of Fame (1998), but his most prized awards are from his peers in the National Cartoonist Society: Best Humor Strip (1981 and 1985), the Elzie Segar Award (1990), and the coveted Reuben Award (1990) for overall excellence in cartooning.