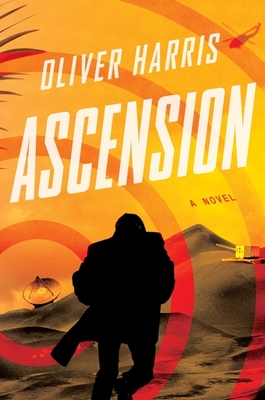 British spy Elliot Kane is forced out of semi-retirement to investigate a colleague’s suspicious death on Ascension Island, a remote and rocky outpost of the British military in the middle of the Atlantic.

Despite foiling a plot to incite a new world war, Elliot Kane has been on probation with MI6 since his rogue misadventures in Kazakhstan. Granted a job teaching literature to college students, he surprisingly enjoys a conventional life away from the intelligence services. Then a former colleague reaches out with a request: one of her tech specialists on a long-term, covert mission has killed himself, and the agency needs to find out why before proceeding with the vital operation. The carrot in this offer is helping his old friend; the stick is more disciplinary action if he doesn’t comply. So Kane takes on deep cover again and heads to one of the most remote places on the planet, Ascension Island.

A curious legacy of England’s imperial past, Ascension is a desolate rock made of dead volcanic cones located in the Atlantic Ocean halfway between Brazil and Angola. Only employees and their families are allowed to reside there, and the island contains both British and American military bases. After learning that a teenage girl disappeared on the same night as the technician’s suicide, Kane finds himself with two mysteries to solve. With local tensions running high, he needs to move quickly before suspicion falls on him. Kane soon realizes the island has more secrets than even the government knows, some leading straight to the highest offices in London.

OLIVER HARRIS was born in London in 1978. He has an MA in Shakespeare studies and a PhD in psychoanalysis. He writes occasionally for the Times Literary Supplement.

PRAISE FOR A SHADOW INTELLIGENCE  AN NPR BEST BOOK OF 2020   “Thought-provoking...there’s certainly more than enough sharp writing and provocative content in this initial adventure to justify a sequel.” —Wall Street Journal   “This may be the deepest a contemporary spy novel has penetrated the cold new world of dark web intelligence and cellphone surveillance…. An absorbing, superbly written novel likely to stand as one of the best spy novels of the year.” —Kirkus, starred review   “Oliver Harris is always pure quality and I’m loving the hell out of his foray into the contemporary spy novel. Elegant and compulsive.” —Ian Rankin   “Elliot Kane needs his wits about him to keep track of his own identities and those of fellow MI6 agent Joanna, who he's looking for in Kazakhstan. The binary simplicity of the Cold War has been replaced by a geopolitical Rubik's cube of corruption, nationalism, oil money and internet deceit. Tremendous evocation of modern Kazakhstan and the contemporary intelligence landscape. Scary if true, or even half true.” —Sunday Times Crime Club, star pick   “Elliott Kane is an unusually thoughtful spy . . . As much a thinker as a doer, Kane has much in common with le Carré's Jerry Westerby or Lionel Davidson's Johnny Porter, a plausibly multi-faceted old school operator with the skills—physical, psychological, intellectual—to negotiate the geopolitical fault lines of central Asia as Russia and China square up over Kazahstan's untapped oil reserves.” —Irish Times   “A Middle East specialist, flies to Astana in Kazakhstan to search for his former colleague and lover Joanna, and gets caught up in the jostling for power, deals and intelligence in a city portrayed as becoming a 21st-century mecca for spooks . . . Classier writing, fresher characters, original setting, a real sense of insider lore (on both spycraft and geopolitics).” —Sunday Times   “A splendid thriller with new perspectives on places and the distinctly unclean side of the great game of espionage.” —Crime Time (Blog)   “A gripping, fast-moving and intelligent novel from new spy fiction star Oliver Harris which will leave readers wanting a lot more Elliot Kane adventures.” —Irish Independent   “Elliot Kane is highly-trained MI6 spook. So highly-trained that he's pretty much forgotten who the hell he really is after years of false identities and subterfuge . . . In a deadly world of deception by just about every nasty state, and that includes his own, he's truly up against it in this complex thriller that keeps you on your toes throughout." —Sunday Sport, four stars   “An intelligent and thoroughly researched spy-procedural giving razor-sharp insight into the particular challenges of 21st-century espionage." —Big Issue   “A twisting spiral of lies and corruption, a pitch-perfect portrait of contemporary London and a beguiling bastard of a hero.” —Val McDermid on The Hollow Man —