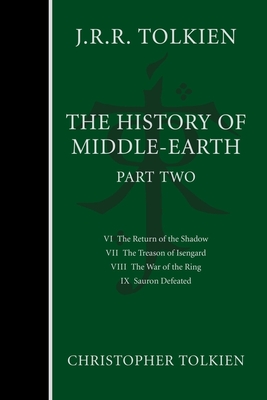 This is book number 2 in the History of Middle-earth series.

This new hardcover edition brings together volumes VI–IX of The History of Middle-earth—The Return of the Shadow, The Treason of Isengard, The War of the Ring, and Sauron Defeated—into one volume. Together these books give a fascinating and complete account of the writing of The Lord of the Rings, and provide the reader with numerous additional scenes, together with rare maps and illustrations, which never made it into the final book, including the epilogue in its entirety.

J.R.R. Tolkien is famous the world over for his unique literary creation, exemplified in The Hobbit, The Lord of the Rings, and The Silmarillion. What is less well known, however, is that he also produced a vast amount of further material that greatly expands upon the mythology and numerous stories of Middle-earth, and which gives added life to the thousand-year war between the Elves and the evil spirit Morgoth, and his terrifying lieutenant, Sauron.

It was to this enormous task of literary construction that Tolkien’s youngest son and literary heir, Christopher, applied himself to produce the monumental and endlessly fascinating series of twelve volumes, The History of Middle-earth.

CHRISTOPHER TOLKIEN (1924–2020) was the third son of J.R.R. Tolkien. Appointed by Tolkien to be his literary executor, he devoted himself to the editing and publication of unpublished writings, notably The Silmarillion, Unfinished Tales, and The History of Middle-earth.

J.R.R. TOLKIEN (1892–1973) is the creator of Middle-earth and author of such classic and extraordinary works of fiction as The Hobbit, The Lord of the Rings, and The Silmarillion. His books have been translated into more than fifty languages and have sold many millions of copies worldwide.