The Ravine: A Family, a Photograph, a Holocaust Massacre Revealed (Paperback) 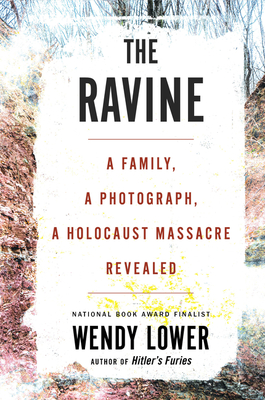 The Ravine: A Family, a Photograph, a Holocaust Massacre Revealed (Paperback)

In 2009, the acclaimed author of Hitler’s Furies was shown a photograph just brought to the United States Holocaust Memorial Museum. The documentation of the Holocaust is vast, but there are virtually no images of a Jewish family at the actual moment of murder, in this case by German officials and Ukrainian collaborators. A Ukrainian shooter’s rifle is inches from a woman’s head, obscured in a cloud of smoke. The woman is bending forward, holding the hand of a barefoot boy. And—only one of the shocking revelations of Wendy Lower’s brilliant ten-year investigation of this image—the photograph reveals the shins of another child, slipping from the woman’s lap.

Wendy Lower’s gripping detective work—in Ukraine, Germany, Slovakia, Israel, and the United States—recovers astonishing layers of detail concerning the open-air massacres in Ukraine. The identities of the victims, of the killers—and, remarkably, of the photographer who openly took the picture, as a secret act of resistance—are dramatically uncovered. Finally, in the hands of this exceptional scholar, a single image unlocks a new understanding of the place of the family unit in the history and aftermath of Nazi genocide.

WENDY LOWER is the author of the National Book Award and National Jewish Book Award finalist Hitler’s Furies, which has been translated into twenty-three languages. Recently the acting director of the Mandel Center for Advanced Holocaust Studies at the U.S. Holocaust Memorial Museum, Lower is the John K. Roth Professor of History and director of the Mgrublian Center for Human Rights at Claremont McKenna College.

“Every element in the photo serves as source material for Lower [whose] investigation into an act of mass murder of individuals in the tiny Ukrainian town of Miropol in 1941 is a book of such breathtaking research, so well-constructed and written, that I read its 178 pages in two sittings—and, had I started early enough, I would have done so in one." — Jewish Currents

“Lower spent the better part of [a] decade researching the image’s story . . . she set out to hold the perpetrators accountable while restoring the deceased’s dignity and humanity—a feat she accomplished." — Smithsonian

“The book is an act of calculated justice—turning the ‘mass’ in mass murder into the families, the people who suffered. Giving them something, however small. For me, that is its power.”  — Times (UK)

“One photograph. That was what it took to start Wendy Lower on an incredible journey of discovery. Using her meticulous historical skills and her gift for shoe-leather investigation, she uncovers and tells a riveting story with implications for the the past and the present. THE RAVINE is a compelling read that is micro and macro history at its very best.” — Deborah Lipstadt, author of National Jewish Book Award winner History on Trial: My Day in Court with a Holocaust Denier and Antisemitism: Here and Now

“An elegantly structured book . . . looks at a photograph that many refuse to face." — Tablet

“Through her international investigation into a single photograph of the shooting of a Jewish family, Wendy Lower presents the Holocaust on the level of personal crime, uncovering the identities and stories of the victims, including the Jewish child, the killers, the neighbors, and the photographer. Seventy years after the crime, Lower, a historian dedicated to unveiling truths, solves what would otherwise have remained a ‘cold case.’ Her story is breathtaking.” — Father Patrick Desbois, author of National Jewish Book Award winner The Holocaust by Bullets: A Priest’s Journey to Uncover the Truth Behind the Murder of 1.5 Million Jews

“An important and moving contribution to Holocaust literature. The Ravine demonstrates how meticulous research, seventy years after the murder captured in the photograph took place, can lift the veil of anonymity from both victims and perpetrators." — Jan T. Gross, author of National Book Award finalist Neighbors: The Destruction of the Jewish Community in Jedwabne, Poland and Fear: Anti-Semitism in Poland After Auschwitz

“The profundity of Lower’s commitment to justice is both admirable and evident. Meticulously researched and thoughtfully written, her book is a testimonial to the power of countering ignorance with education and the importance of restoring the dignity of personhood to those erased by genocide. An intelligent and restoratively compassionate historical excavation.” — Kirkus Reviews

“Meticulously researched . . . [Lower’s] search uncovers a wealth of information related to WWII in Ukraine and makes a persuasive case for how historical scholarship can ‘help turn the wheels of justice.’ This harrowing chronicle casts the Holocaust in a stark new light.” — Publishers Weekly