Theuerdank: The Illustrated Epic of a Renaissance Knight (Paperback) 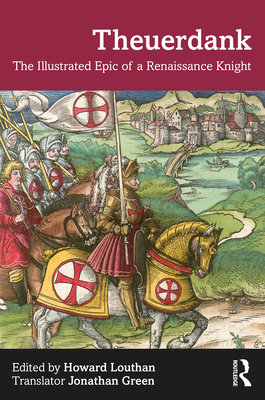 Theuerdank: The Illustrated Epic of a Renaissance Knight (Paperback)

Now appearing in its first English translation, Theuerdank introduces readers to the fascinating world of the Renaissance. A forerunner of the graphic novel, Theuerdank , first published in 1517, includes more than 100 woodcuts executed by leading artists of Central Europe.

Long hailed by scholars as a masterpiece of German literature, Theuerdank is a fictional account of Habsburg Emperor Maximilian I (1508- 19) and his journey to wed one of the most influential princesses of Europe, the wealthy heiress Mary of Burgundy. Through word and image, this epic poem, which casts Maximilian as Knight Theuerdank, recounts his adventures overcoming a series of challenges to reach his goal: avalanches, lightning strikes, shipwrecks, murder plots, duels, and pitched battles. From politics and propaganda to the environment and the natural world, from intimate glimpses of daily life to revolutionary innovations in warfare, Theuerdank sheds light on those critical changes transforming European society and culture in this period.

With the inclusion of an introductory essay, chronology, genealogical tables, maps, translator's note, and discussion questions, this volume is a useful tool for students of history, art history, German, and Renaissance studies.

Howard Louthan is Professor of History and Director of the Center for Austrian Studies at the University of Minnesota. His scholarship focuses on the intellectual and cultural history of Central Europe. His publications include Print Culture at the Crossroads (2021) and Converting Bohemia (2009). Jonathan Green teaches German in the Department of Modern and Classical Languages at the University of North Dakota. His books include Printing and Prophecy: Prognostication and Media Change, 1450- 1550 (2011) and The Strange and Terrible Visions of Wilhelm Friess: Paths of Prophecy in Reformation Europe (2014).