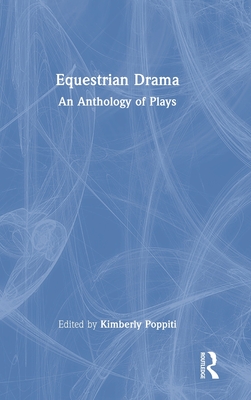 Equestrian Drama: An Anthology of Plays is a collection of four representative equestrian dramas.

It includes four annotated plays: Timour the Tartar by Matthew G. Lewis, The Battle of Waterloo by J. H. Amherst, Mazeppa by Henry M. Milner, and The Whip by Henry Hamilton and Cecil Raleigh. An introduction precedes the collection, providing the information necessary to understand and contextualize the genre and the plays as both written and performance texts, and within the time period of their original productions, as well as within the larger histories of theatre and equestrian entertainments. Additional related plays are identified, excerpted, and explored, providing readers with a wide range of examples to better understand the development and significance of this unique form of popular theatre. Also identified and explored are significant contributions made to stage technology and design by the patented stage machinery designed for the production of the mechanized form of equestrian drama, which became popular in the late nineteenth century.

An online supplement to this book is available to provide readers with additional content relating to this collection, including original English language translations of La Fille Hussard and Rognolet and Passe-Carreau, as well as the full annotated text of Turpin's Ride to York.

Kimberly Poppiti has been exploring the connections between horses and theatre for decades. She is the author of A History of Equestrian Drama in the United States: Hippodrama's Pure Air and Fire (Routledge, 2018) and numerous related articles. Kimberly is also a two-time winner of the United States Institute for Theatre Technology's Herbert D. Greggs Award, as well as the recipient of a Greggs Merit Award, for her writing on theatre design and technology. She holds a PhD in Educational Theatre from New York University and an MFA in Dramaturgy from Stony Brook University, and teaches at St. Joseph's University in New York. Visit her online at: http: //kimberlypoppiti.com/