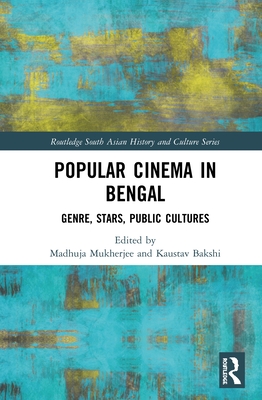 Popular Cinema in Bengal marks a decisive turn in studies of Bengali language cinema by shifting the focus from auteur and text-based studies to exhaustive readings of the film industry.

The book covers a wide range of themes and issues, including: generic tropes (like comedy and action); iconic figurations (of the detective and the city); (female) stars such as Kanan Bala, Sadhana Bose and Aparna Sen; intensities of public debates (subjects of high and low cultures, taste, viewership, gender and sexuality); print cultures (including posters, magazines and song-booklets); cinematic spaces; and trans-media and trans-cultural traffic. By locating cinema within the crosscurrents of geo-political transformations, the book highlights the new and persuasive research that has materialised over the last decade. The authors raise pertinent questions regarding 'regional' cinema as a category, in relation to 'national' cinema models, and trace the non-linear journey of the popular via multiple (media) trajectories. They address subjects of physicality, sexuality and its representations, industrial change, spaces of consumption, and cinema's meandering directions through global circuits and low-end networks.

Highlighting the ever-changing contours of cinema in Bengal in all its popular forms and proposing a new historiography, Popular Cinema in Bengal will be of great interest to scholars of film studies and South-Asian popular culture. The chapters were originally published in the journal South Asian History and Culture.

Madhuja Mukherjee is Associate Professor of Film Studies at Jadavpur University, India. Her publications include New Theatres Ltd.: The Emblem of Art, The Picture of Success (2009), Aural Films, Oral Cultures (2012), and the award-winning anthology Voices of the Talking Stars (2017). She is co-editor of Industrial Networks and Cinemas of India (forthcoming). Kaustav Bakshi is Assistant Professor in the Department of English at Jadavpur University, India. A Charles Wallace Fellow, he has worked on Anglophone Sri Lankan Literature for his doctoral thesis. His published books include Anxieties, Influences and After: Critical Responses to Postcolonialism and Neocolonialism (2009) and Rituparno Ghosh: Cinema, Gender, and Art (2017).