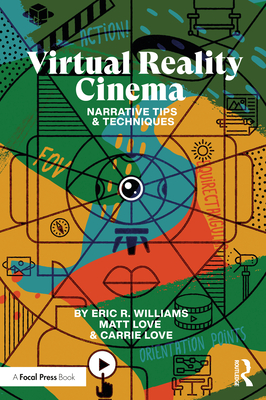 Join these veteran cine-VR storytellers as they break down fundamental concepts from traditional media to demonstrate how cine-VR can connect with audiences in new ways. Examples from their professional work are provided to illustrate basic, intermediate and advanced approaches to crafting modern story in this unique narrative space where there's no screen to contain an image and no specific stage upon which to perform.

Virtual Reality Cinema will prepare you to approach your own cine-VR projects via:

Tips and techniques for writing, directing and producing bleeding-edge narrative cine-VR projects; More than a hundred photos and illustrations to explain complex concepts; Access to more than two hours of on-line cine-VR examples that you can download to watch on your own HMD; New techniques developed at Ohio University's Game Research and Immersive Design (GRID) Lab, including how to work with actors to embrace Gravity and avoid the Persona Gap, how to develop stories with the Story Engagement Matrix and how to balance directorial control and audience agency in this new medium.

This book is an absolute must read for any student of filmmaking, media production, transmedia storytelling and game design, as well as anyone already working in these industries that wants to understand the new challenges and opportunities of virtual reality cinema.

Eric R. Williams has won the Best New Screenplay award from the Writers Guild of America, an Emmy Award for interactive media and the University Professor Award for Excellence in Teaching. He was a chief architect of the Game Research and Immersive Design (GRID) Lab's virtual reality curriculum and is a professor in the J. Warren McClure School of Emerging Communication Technologies. Carrie Love is an award-winning independent filmmaker with an MFA from Ohio University who currently serves as the Program Manager of Film and Video Production for Hocking College. She has produced and directed several projects in coordination with the GRID Lab including multimillion dollar cine-VR narrative productions.Matt Love is a professional cinematographer with an MFA from Ohio University who currently serves as a project manager for the GRID Lab and teaches filmmaking at Hocking College. Matt recently shot and edited a feature-length cine-VR project for the state of Ohio, which added to his long list of completed and upcoming cine-VR work.