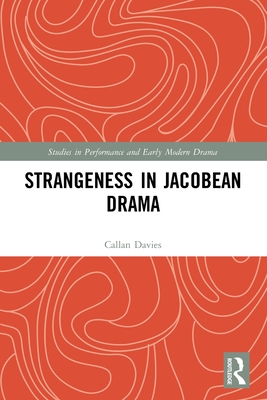 Callan Davies presents "strangeness" as a fresh critical paradigm for understanding the construction and performance of Jacobean drama--one that would have been deeply familiar to its playwrights and early audiences. This study brings together cultural analysis, philosophical enquiry, and the history of staged special effects to examine how preoccupation with the strange unites the verbal, visual, and philosophical elements of performance in works by Marston, Shakespeare, Middleton, Dekker, Heywood, and Beaumont and Fletcher.

Strangeness in Jacobean Drama therefore offers an alternative model for understanding this important period of English dramatic history that moves beyond categories such as "Shakespeare's late plays," "tragicomedy," or the home of cynical and bloodthirsty tragedies.

This book will be of great interest to students and scholars of early modern drama and philosophy, rhetorical studies, and the history of science and technology.

Callan Davies researches the cultural, literary, and theatrical history of early modern England. He has taught at universities across the UK and at Shakespeare's Globe, and he is part of the project teams Before Shakespeare and Middling Culture. His work includes studies of Elizabethan playhouses, rhetoric, practice-as-research, and he edits the Curtain playhouse records for the research project Records of Early English Drama (REED).