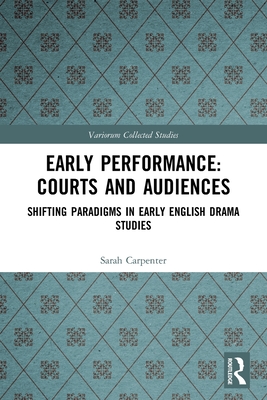 These essays of Sarah Carpenter have been selected to reflect her career's close focus on the relationship of performance and audience. They are drawn from the last 25 years of her writing, and this has enabled the editors to organise them not chronologically but rather to develop her central theme through a range of genres, including morality plays, the interlude, court entertainments, international political spectacle, and the public 'performances' of natural and maintained fools. As a scholar who also has experience of acting and of production, Carpenter is particularly sensitive to the implications of location for creating meaning and generating audience reaction. The essays are focused on a relatively short time-span of 120 years, from the late fifteenth to the turn of the seventeenth century, and thus nuance a period traditionally divided between the late medieval and the early-modern, and between Catholicism and Protestantism. Carpenter shows how the dynamics of theatrical engagement in which the roles of audience and performer are frequently mixed or even reversed offer a more creative route to understanding how the individual and society respond to change. (CS1090)

Sarah Carpenter taught in the English department at Exeter University before joining the department at Edinburgh in 1976. She has interests in drama and in the medieval and Tudor periods, teaching courses in medieval English and Scots literature, and in drama and theatre history. During her time at Edinburgh she has worked widely in student support, curriculum development and teaching practice, and was head of department 2003-2006. She is an editor of the journal Medieval English Theatre, and has published books and articles on early theatre, performance, staging, and political and cultural issues, including Masks and Masking in Medieval and Early Tudor England (with Meg Twycross, 2002) for Routledge. She is currently preparing a set of pre-1642 drama records relating to the Scottish Royal Court, for the 'Records of Early English Drama' series.John J McGavin is Emeritus Professor of Medieval Literature and Culture at the University of Southampton. He has published on a range of medieval topics, including Chaucer and Dissimilarity (2000), Theatricality and Narrative in Medieval and Early-Modern Scotland (2007), which won the Frank Watson Book Prize for Scottish History, and with Professor Greg Walker, Imagining Spectatorship from the Mysteries to the Shakespearean Stage (2016). With Dr Eila Williamson of Glasgow University, he is preparing a set of pre-1642 provincial drama records from the South-East of Scotland, for the 'Records of Early English Drama' series. Greg Walker is Regius Professor of Rhetoric and English Literature at the University of Edinburgh. He writes mainly on medieval and Renaissance drama and cultural history. His most recent books include, The Oxford Handbook of Tudor Drama (co-edited with Thomas Betteridge, OUP, 2012), Reading Literature Historically (Edinburgh UP, 2013), The Oxford Anthology of Tudor Drama (OUP, 2014), and Imagining Spectatorship from the Mysteries to the Shakespearean Stage (OUP, 2016), co-written with John J. McGavin. He has just completed for OUP a biography of the playwright, musician and epigrammatist John Heywood, funded by a Leverhulme Trust Major Research Fellowship.