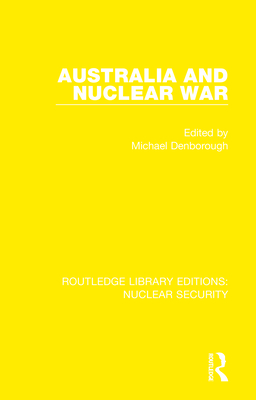 'I pray that words spoken at this conference may carry beyond walls and reach thousands of ears hitherto deaf to warnings of the final catastrophe.' So said Patrick White in June 1983 at an important symposium organised by the Australian National University to examine the whole issue of nuclear war and its implications for Australia.

Many prominent Australians - including H. C. Coombs, Senator Susan Ryan, leading academics and medics - attended the conference along with distinguished experts from overseas, and mingled and talked with many representatives of Australian peace movements. In two intense and emotional days they discussed many different aspects of the crisis that threatens the world, from the latest scientific thinking on possible effects on the atmosphere to the increasingly important role of the women's peace movement and the efforts of ordinary people around the world to stop the nuclear arms race.

Originally published in 1983, this book presents the upshot of these deliberations, including unforgettable illustrations of some of the consequences of nuclear war. The book does not pretend to provide the answers, nor does it take any political viewpoint. It does present the authoritative opinions of some of the world's leading minds on the extent of the threat that faces Australia alongside powerful statements from committed men and women from around the world - opinions that will inform and disturb all thinking Australians.