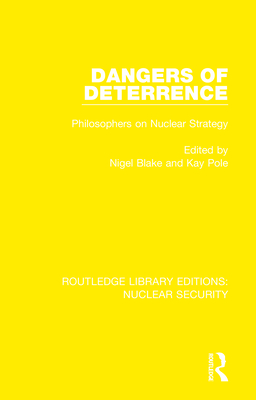 Europe has everything to lose from nuclear war, and nothing to gain from it. Yet it is nuclear deterrence that we are relying on to shield us from war. More and more people are coming to believe that security under a nuclear shield is an illusion, and that nuclear deterrence embodies a dangerous paradox. It is too close to provocation, it cannot prevent nuclear blackmail, and its short-term success can only lead to proliferation and ultimate instability. In this book, originally published in 1983, philosophers go behind the rhetoric of the nuclear debate and analyse the dangers of deterrence.

The contributors all share a concern about the radical confusions that have arisen concerning nuclear deterrence. Showing how unilateral arguments can be developed from hard-headed political and military considerations, they stress their belief that carefully managed unilateralism is the best method for securing the political independence of Western Europe. The doctrine is not founded on sheer moral idealism. This book will be essential reading for anyone engaged in the public discussion of defence policy.