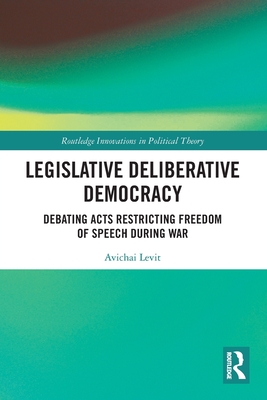 Freedom of speech is a basic right in a democracy. During war, however, national legislatures tend to enact laws that restrict this basic right. Under what circumstances can such laws be democratically legitimate?

Avichai Levit argues that the degree of democratic legitimacy of laws that restrict freedom of speech during war depends on the extent of legislature deliberation on such laws. The more law makers in both chambers of the legislature seriously consider information and arguments, reason on the common good and seek to persuade and decide the best legislative outcome, in committees and on the floor, the more democratic legitimacy can be associated with such laws. This book fills a gap in the scholarly literature regarding the evaluation of the democratic legitimacy of laws that restrict freedom of speech during war, by bridging different theoretical perceptions and presenting an alternative normative account of deliberative democracy which focuses on the deliberations of a national legislature. Using the United States as a case study, Levit delves into the details of Congressional deliberation during World War I, World War II and the Cold War, as well as the political histories that brought about such laws.

Legislative Deliberative Democracy will be of interest to academics and students alike in the fields of political theory, American politics and political history.

Avichai Levit is a civil service professional and former diplomat. He is currently Deputy Department Director for Audit of the Ministry of Defense at Israel's State Comptroller's Office, directing oversight activities of the national security sector. He is a visiting lecturer at Tel Aviv University's School of Political Science, Government and International Affairs.