Donations to the Knights Hospitaller in Britain and Ireland, 1291-1400 (Paperback) 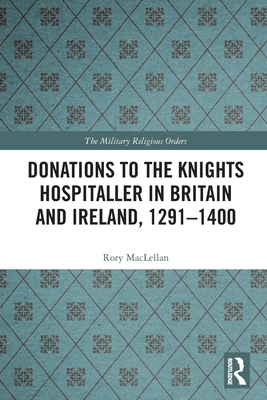 Donations to the Knights Hospitaller in Britain and Ireland, 1291-1400 (Paperback)

The book demonstrates that patrons donated to both military and non-military orders for much the same reasons, particularly family connections or the desire for spiritual benefit, rather than an interest in crusading. Such a conclusion has important implications for the treatment of the military orders by scholars of medieval religion, who traditionally have either overlooked these orders entirely or relegated them to a subfield of crusade studies rather than treating them as a full part of mainstream religious life. By reincorporating the military orders into mainstream religious history, discussion will be furthered in a range of fields and debates, such as ecclesiastical landholding, lay-church relations, the role of women in religion, and the processes of the Reformation. By focusing on the period 1291 to 1400, the book considers the impact of the loss of the Holy Land in 1291; the subsequent diffusion in crusade activity to the Baltic and Spain; the intensification of the order's career as English royal servants in Wales, Scotland, and Ireland; and the Hospitallers' crusade to Rhodes in 1309-10.

This book will appeal to scholars and students of the Hospitallers, as well as those interested in medieval Britain and Ireland.

Rory MacLellan is a postdoctoral research fellow at Historic Royal Palaces, specialising in medieval religious history, particularly the crusades and the military orders.