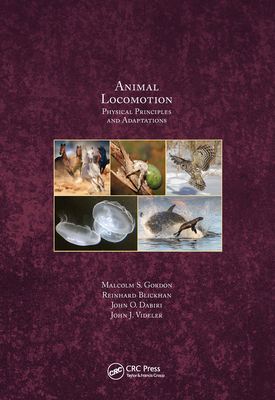 Animal Locomotion: Physical Principles and Adaptations is a professional-level, state of the art review and reference summarizing the current understanding of macroscopic metazoan animal movement. The comparative biophysics, biomechanics and bioengineering of swimming, flying and terrestrial locomotion are placed in contemporary frameworks of biodiversity, evolutionary process, and modern research methods, including mathematical analysis. The intended primary audience is advanced-level students and researchers primarily interested in and trained in mathematics, physical sciences and engineering. Although not encyclopedic in its coverage, anyone interested in organismal biology, functional morphology, organ systems and ecological physiology, physiological ecology, molecular biology, molecular genetics and systems biology should find this book useful.

Malcolm S. Gordon is Professor in the Department of Ecology and Evolutionary Biology at Univ of California Los Angeles. His research focus on functional morphology, biomechanics, kinematics, and hydrodynamics of swimming in fishes using different methods of locomotion. Reinhard Blickhan is Professor in Sport Science at Friedrich Schiller University, Jena. John O. Dabiri is a professor in the School of Engineering at Stanford University. Prior to joining the Stanford faculty in 2015, he was Professor of Aeronautics and Bioengineering at Caltech, where he also served as Chairman of the Faculty and Dean of Undergraduate Students. His research focuses on science and technology at the intersection of fluid mechanics, energy and environment, and biology. Recent honors for this work include a MacArthur Fellowship, an Office of Naval Research Young Investigator Award, and a Presidential Early Career Award for Scientists and Engineers (PECASE). Popular Science magazine named him one of its Brilliant 10 scientists in 2008. For his research in bio-inspired wind energy, Bloomberg Businessweek magazine listed him among its Technology Innovators in 2012, and MIT Technology Review magazine named him one of its 35 innovators under 35 in 2013. In 2014, he was elected a Fellow of the American Physical Society. John J. Videler is Emeritus Professor at Leiden University & Groningen University